The Dark Pictures Anthology: The Devil in Me is a survival horror game. Players have a chance to decide the fate of five characters who are part of a documentary crew. They have to survive the modern-day imitator of H.H. Holmes, a man who supposedly killed 9 out of 200 people.

The main protagonists are a couple who accidentally book a hotel where a murder is planned. There are 50 hidden secrets to discover, including the identity of the murderer wearing the Holmes mask.

Intriguing but Lacks of Originality in Story

While the game uses a number of borrowed tropes from the Saw series, it also borrows a lot from the 1800s. In particular, the game has a dummy room with a furnace. This is meant to mimic the real-life Holmes Hotel.

The Devil in Me needs to come up with original ideas and a storyline that keeps the reader interested. Despite its obvious inspiration from Holmes, it isn’t really interested in his actual crimes.

While the game features two different multiplayer modes, the single-player game only allows you to choose one of the two. You can either play as the Curator or the young married couple.

Both options have a variety of endings. Luckily, there is a way to save the other characters, too. That is if you can find the secret. In addition, there are plenty of collectibles, too. These are obol coins that you can use to unlock items.

There are 3 other game modes other than multiplayer in Devil in Me: survival mode, shared story mode, and single player mode.

Fortunately, the game’s also got some improvements over its predecessors. For starters, there’s a new jumping mechanic. Also, a new inventory system, a climbing surface, and expanded movement actions.

But even with its new features, The Dark Pictures Anthology: The Devil in Me falls short of its own promise. Instead, it borrows heavily from the story of H.H. Holmes, which may be more interesting to some people than to others.

Alternate Ends Are Back

While The Devil in Me doesn’t have the depth of other titles in the series, it still offers a satisfying experience. Aside from the story, there are several elements to explore, and the game’s final act leads to a grim resolution.

Like in previous games of the Dark Pictures Anthology, you have to be careful about making the wrong choice. Even a seemingly insignificant mistake can be fatal. Players will be given multiple choices that can alter the course of the story and even their relationships.

Overall, developed by Supermassive Games, The Dark Pictures Anthology: The Devil in Me is a decent survival horror game that doesn’t offer much more than a lot of repetition. In other words, it doesn’t have enough subversion or interesting storylines to make it stand out. The game offers players multiple choices for moral dilemmas. In the end, your choice will have consequences, and there are three possible outcomes for the whole story. 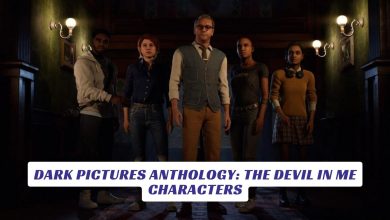 Dark Pictures Anthology: The Devil in Me Characters