The Quarry may be one of the best video games that have been released this year. Besides its amazing gameplay and graphics, this fantastic game offers you more than you can expect. In the following, you can find the full list of The Quarry game cast, which will definitely surprise you!

Before providing the details, we would like to note that the story of The Quarry shapes depending on your choices, and you are going to play with nine different characters. If you are a fan of horror games, we assure you that The Quarry is going to be one of the most cult video games, especially in the horror genre. If you want to get more info about The Quarry, stay tuned to Lawod since we have many upcoming articles about it.

If you have watched The Amazing Spider-Man and you remember Gwen Stacy’s brother Howard, he is Skyler Gisondo, who is voicing Max Brinly in the game. However, he is not the only celebrity in the cast!

Those who watched Hell on Wheels, Billy the Kid, or Sacred Lies, then you already know Siobhan Williams. She is voicing Laura Kearney, who is the first character you control in the game.

Moreover, we bet you remember the name Ted Raimi from somewhere. Do not force your memory to find out who he is. He is the brother of famous film director Sam Raimi. He is famous for his roles in the Spider-Man movies and Ash vs. Dead. He is voicing a cop called Travis Hackett in the game.

As you can see, The Quarry paid utmost attention to every detail in the game and worked with the professionals to develop one of the best horror games ever released! You can watch the official video released on YouTube by the publisher 2K about playing the game with The Quarry’s cast. In our opinion, The Quarry is worth giving a try just because of the quality of the cast. We bet you have never seen such celebrities together in a video game production before. 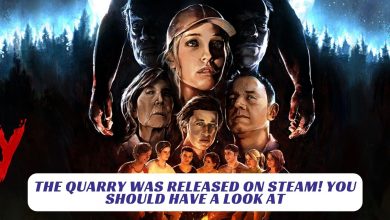 The Quarry Was Released on Steam! You Should Have A Look At