Splitgate is one of the popular multiplayer first-person shooter games these days. This game is totally free, and they released their first season in August. If you are ambitious about climbing ranks in this amazing game, then this guide is for you.

We have compiled everything you might want to learn about Splitgate ranks in the following sections. Despite the first season, i.e., Season 0, being started in August, you are still not late! You can practice and test your skills for the upcoming season.

Requirements for Ranked Mode in Splitgate

Unfortunately, not all players are eligible for playing to ranked match in Splitgate. You need an account with at least 15 levels to participate in 4 vs 4 deathmatches in the game. In fact, this is a standard procedure in many games.

In this way, Splitgate takes measures to prevent cheaters from ruining the fun of others. Moreover, the game forces players to get used to the mechanics to perform better in ranked matches. In this way, you can team up with better players who are aware of the game and its objectives.

By the way, you can check the Splitgate Game Review article if you are not familiar with the game.

What Are Splitgate Ranks?

As of Season 0, Splitgate announced that there will be eight ranks. Just like all other games that offer ranked mode, Splitgate also adopted the Elo system. This system calculates your individual ranking score depending on two factors: your personal performance and the overall performance of your team.

This means that even if your team sucks, you can still minimize the loss by playing better and doing your best. This also improves the quality of the game. Thanks to the Elo system, you can also team up with other players who have similar gaming experiences with you.

Below, you can find eight Splitgate ranks, and the minimum Elo score you need to have acquired them.

We would like to note that there are some debates about the reliability of the Elo system in ranked games. However, this system is the most successful ranking system that is also adopted by many famous multiplayer games. 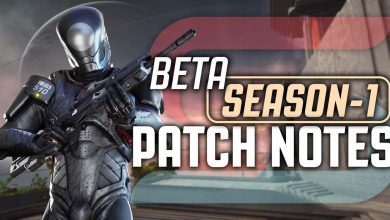 Splitgate Season 1 Released – What Is New?