The Escapists is an action strategy game where you try to escape from somewhere. Developed by Mouldy Toof Studios and published by Team17 Digital Limited, The Escapists is now free on Epic Games Store until September 30.

The Escapists is a single-player action strategy game played from a top-down perspective. The game was initially released in 2014 on Steam.

The main objective of this game is to escape from six primary prisons ranging from very easy to very hard. When you escape from prison, you’ll unlock the next prison. It is also possible to purchase additional maps as DLC, as you can see in the trailer.

You start the game as a prisoner who is on the first day in prison. Then you are making a plan to escape from prison. Here, the game leaves the plan entirely to you. Whether you start a riot in prison, dig a tunnel under the walls, or steal a guard’s outfit and infiltrate with it. The escape plan is entirely up to you.

The Escapist has many gadgets to help you escape from prison. Every prisoner has daily routine duties. You can collect these tools during these missions. Be careful to choose tools that fit your plan.

Since the game is a small game, you can run it on almost any computer that meets at least the following system requirements.

The Escapists initially appeared in 2014 as an early access game on Steam. A year later, in 2015, the game was fully released for Microsoft Windows PC, macOS, Linux, PlayStation 4, Xbox One, and Xbox 360. In 2017, it came for the mobile platforms iOS and Android. Finally, the Nintendo Switch version of the game was released in 2018 with all DLC’s.

Below you can find all the download links of the game for your preferred platform. But, between September 23 and September 30 is the perfect period to purchase The Escapist from Epic Games Store. Cause Epic Games is giving away the game for free of charge between this period.

To discover more games, to get the latest news, and learn more about your favorite game, make sure you allowed the browser notifications, followed our social media accounts, and added Lawod’s Epic Games Free Games List Chrome Extension on your browser. Stay Tuned To Lawod. 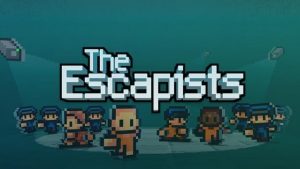 The Escapists is an action strategy game where you try to escape from somewhere. Developed by Mouldy Toof Studios and published by Team17 Digital Limited, The Escapists is now free on Epic Games Store until September 30.